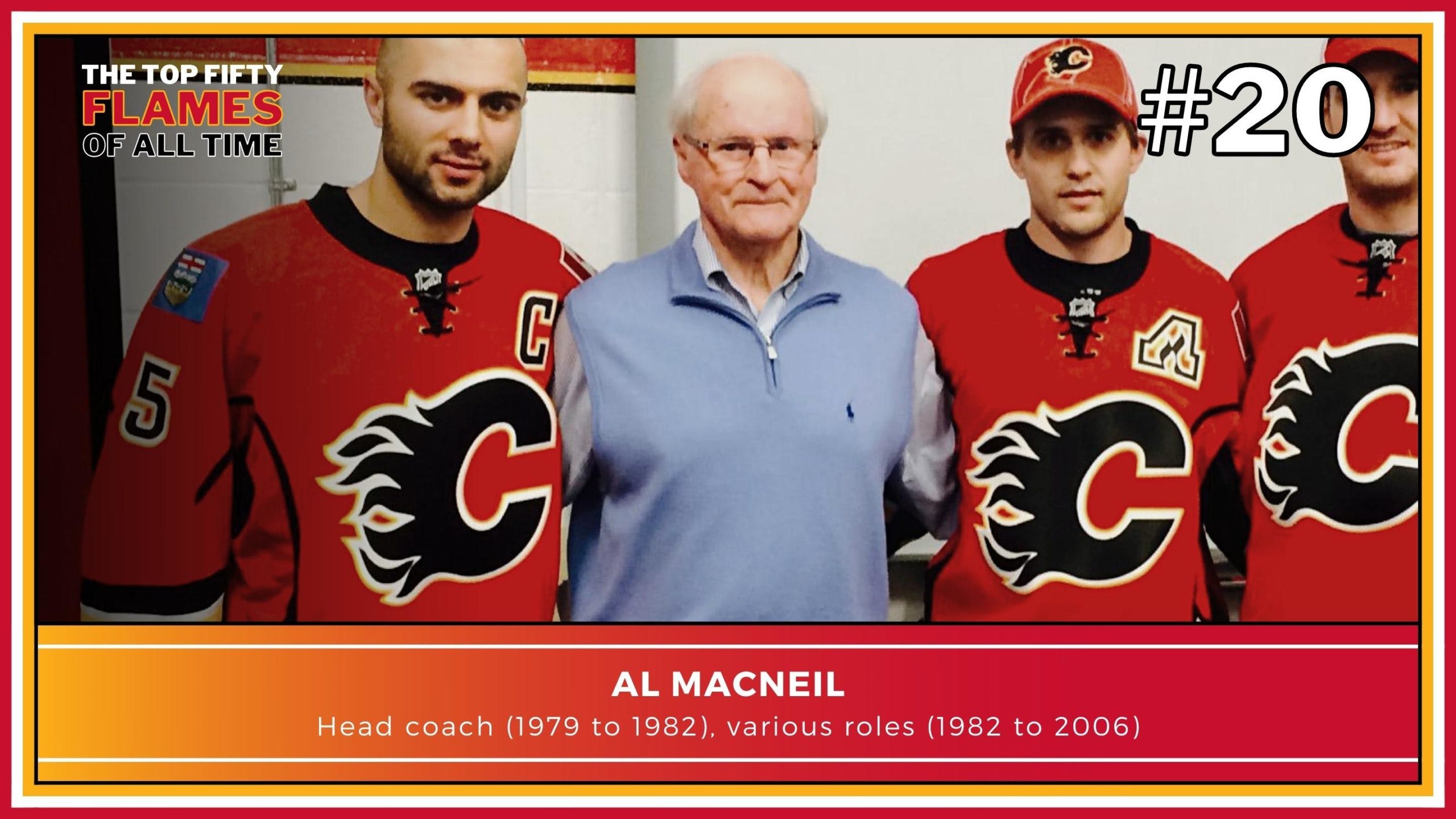 By Ryan Pike
4 months ago
Al MacNeil played precisely zero games with the Calgary Flames. Heck, the franchise wasn’t established until a couple seasons after he ended his playing career. But MacNeil has arguably been one of the most influential off-ice figures – aside from perhaps owners or general managers – in club history.
He’s #20 on our countdown.
Head Coach, 1979-82; Director of Player Development/Scouting, 1982-85; Assistant General Manager, 1985-89; Vice-President of Hockey Operations, 1989-92; Director of Hockey Operations, 1992-98; Assistant Coach, 1998-2000; Special Assistant to the General Manager, 2001-06; Interim Head Coach, 1991-92 and 2002-03; Unofficial Consultant, various seasons
(Disclaimer: MacNeil had roughly a thousand jobs and titles during his time with the Flames, so we did our best to get them close to correct.)
A product of Sydney, Nova Scotia, MacNeil played seven seasons in the NHL as a blueliner and earning the nickname Chopper (decades before it was also bestowed upon fellow Cape Bretoner Al MacInnis). After retiring in 1970, he served in a few different roles in the Montreal Canadiens organization – assistant coach, interim head coach, AHL head coach and director of player personnel (winning three Stanley Cups) – before leaving for the Atlanta Flames in 1979, who were looking for a head coach.
The Flames made the playoffs in all three seasons MacNeil was behind the bench – one in Atlanta and two in Calgary. In their first season in Calgary, 1980-81, they made it to the third round – the furthest the club had ever made it at the time. MacNeil was transitioned into management after 1982, and he worked in various management capacities for the better part of the next 25 seasons. During his time with the club, MacNeil had his hands in everything, and was one of the most respected and influential figures in the club’s hockey operations department.
MacNeil went back behind the bench a few times. He served as interim head coach twice – once after Doug Risebrough resigned in 1991-92 and again after Greg Gilbert was fired in 2002-03. He also became an assistant coach for a few seasons in the late ’90s when no suitable external candidates were found.
MacNeil retired officially from full-time hockey work in 2006, but he’s still occasionally around the rink – though he’s in his 80s, so not as much as he used to be. Another MacNeil is continuing Al’s legacy: his son Allister works for the club as amateur scout covering the WHL.