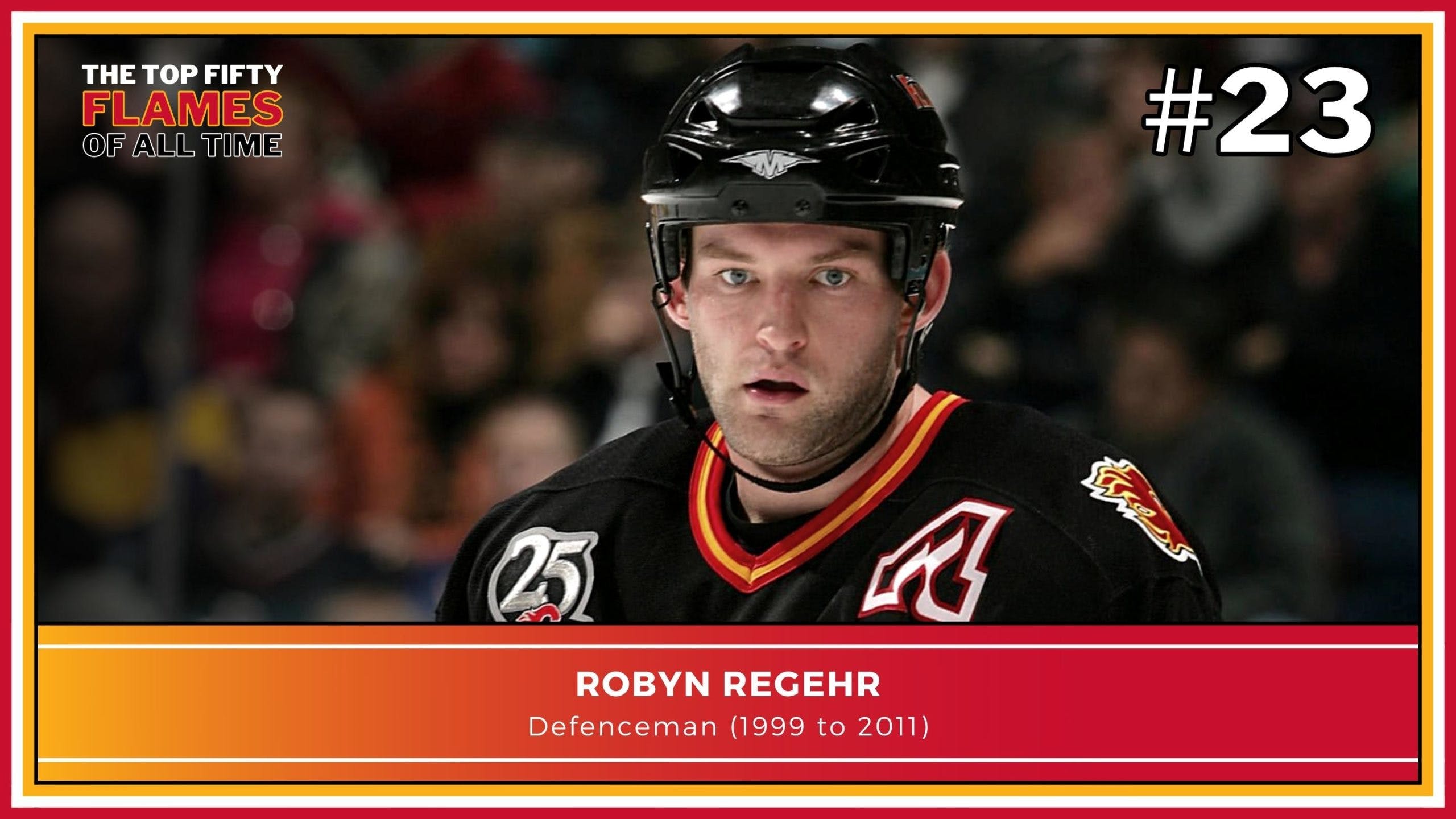 By Ryan Pike
2 months ago
Folks, sometimes there are players that come in and while they might not be huge scorers, they’re crucial to the culture of the franchise. In the 1980s, the Calgary Flames had Tim Hunter. in the 2000s, they had Robyn Regehr.
Let’s take a look at Regehr, #23 on our countdown.
Player, 1999-2011
Regehr’s life before he landed in the NHL is pretty fascinating. He was born in Brazil while his parents were doing missionary work. He moved to Indonesia for a few years before the family settled in Saskatchewan when he was seven years old. He came up through the WHL, where he played with the Kamloops Blazers, and his strong play earned him a first round selection by Colorado in the 1998 NHL Draft.
Regehr was sent to the Flames from Colorado in the Theoren Fleury trade – the Flames were given a list of prospects by the Avalanche and they selected Regehr. In July 1999, Regehr and his brother were involved in a car accident that killed two people in the other vehicle and broke both of Regehr’s legs, leading to questions about his hockey future. But Regehr underwent surgery and recovered faster than anticipated, landing himself a spot on the Flames roster (following a brief rehabilitation stint in the AHL).
Regehr never became an offensive powerhouse. His peak production was 26 points. But he was perhaps the ideal combination of size, mobility, two-way play, and a willingness to deliver punishing hits without pulling himself out of defending position. He never tried to do too much, allowing the game to come to him… and it was this approach that made him both very effective for the Flames, and the purveyor of what became known by fans as the “tunnel of death” – a method of quick close-out hitting along the boards that frequently victimized opposing forwards trying to enter the Flames zone, most notably Edmonton Oilers forward Ales Hemsky.
Regehr served as an alternate captain from 2003-04 until his departure from the Flames in the 2011 off-season, and essentially he served as the club’s secondary leader behind Jarome Iginla during the team’s post-lockout years. He was a crucial part of their 2004 run to the Stanley Cup Final. He received Norris Trophy votes in 2005-06 and 2006-07, and even represented Canada at the 2006 Winter Olympics.
The Flames eventually moved on from Regehr, trading him to Buffalo at the 2011 NHL Draft – it was part of a couple transactions to open up enough cap space to re-sign Alex Tanguay (and avoid losing him to free agency). Regehr eventually moved onto Los Angeles, where he won a Stanley Cup before retiring after the 2014-15 season.
In terms of offensive contributions, there are much more important Flames than Regehr. But in terms of longevity and impact on the culture of the organization, few have had a larger impact.