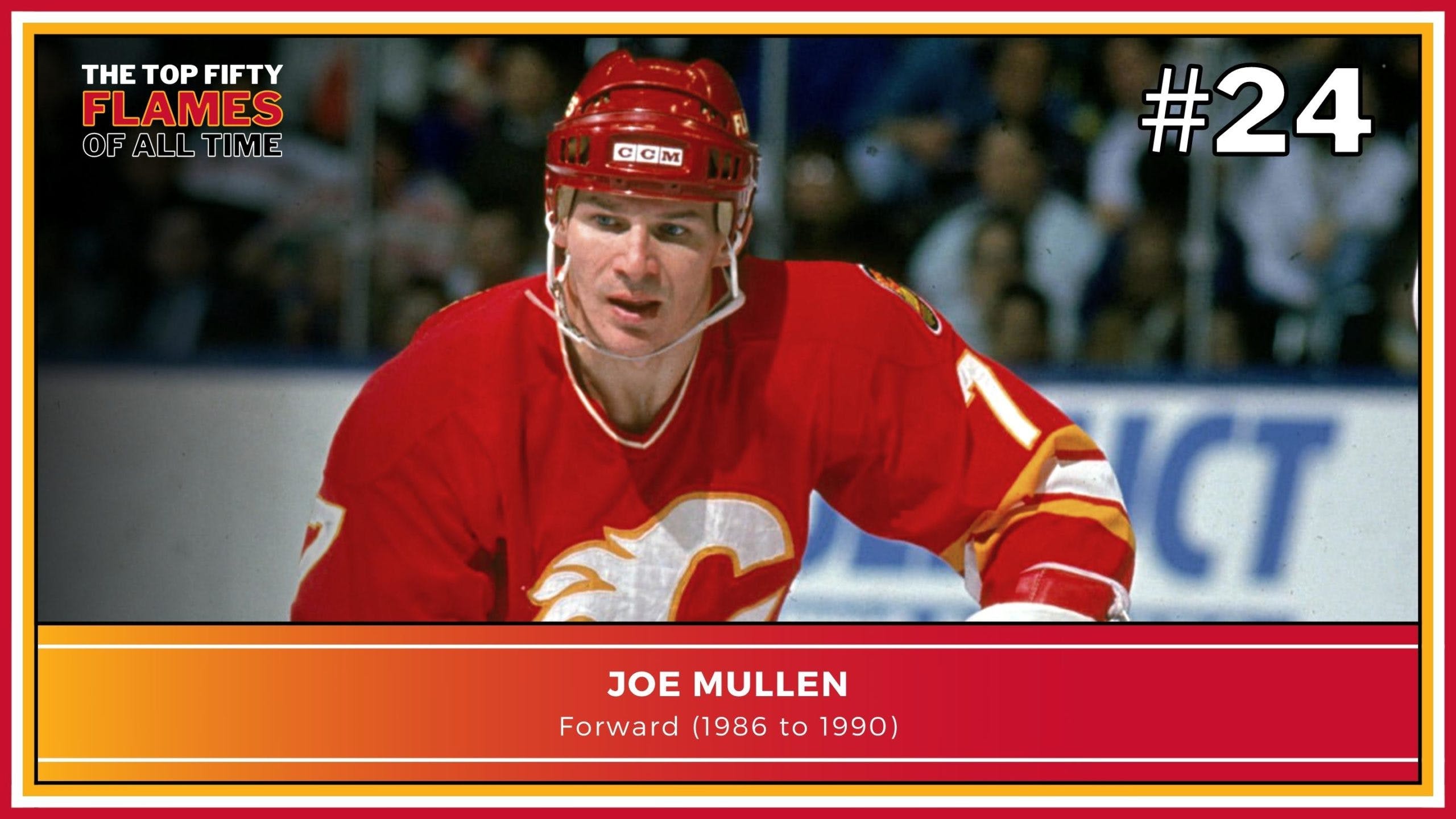 By Ryan Pike
4 months ago
In the history of the Calgary Flames, there have been several players of small physical stature that made a big on-ice impact. One of the first, and best, was a short winger from Boston College.
Let’s look at Joe Mullen, #24 on our countdown.
Player, 1986-90
A product of New York City, Mullen was incredibly productive as a young forward but had to deal with the usual doubts due to his size – he was listed at 5’9″ and 180 pounds for most of his career. He went to Boston College where he played four seasons and was excellent.
He signed with the St. Louis Blues as an undrafted free agent. After two seasons in the minors with Salt Lake City, he broke through into the NHL in 1981-82 and remained a regular for the remainder of his career. He spent three more full seasons with the Blues before being acquired by the Flames.
Midway through the 1985-86 season, the Flames traded Eddy Beers, Charlie Bourgeois and Gino Cavallini for Mullen, Terry Johnson and Rik Wilson. Coming off a few strong offensive seasons, Mullen was seen as the centrepiece, and the Flames hoped he’d add an element to their offence. He led the Flames with 12 goals and 19 points in their run to the 1986 Stanley Cup Final, immediately proving Cliff Fletcher’s acquisition a savvy one.
Mullen spent four more seasons with the Flames, scoring 47, 40, 51 and 36 goals in that span. During his five (full and partial) seasons with the club, they went to two Stanley Cup Finals. Mullen received Lady Byng votes every single season, winning the trophy twice. He received year-end all-star votes every season, being named to the league’s first all-star team in 1988-89 when he popped off for 51 goals and 110 points. (He finished fifth in Hart Trophy voting that season.)
Mullen spent one more season with the Flames, which saw (a) him turn 32 and (b) his production drop to 69 points. The Flames opted to flip Mullen following the season, sending him to Pittsburgh in exchange for a second-round pick. He played with the Penguins and Boston Bruins, winning a pair of Cups with Pittsburgh, before retiring in 1997.
Mullen was a fantastic hockey player. He was the first American-born player to reach 500 goals and 1,000 points, and he was the NHL’s all-time leading American-born scorer from 1989-90 until 1998-99. He was inducted into the Hockey Hall of Fame in 2000. When he was with the Flames, he added a bit of speed, tenacity and offensive flair that made the club extremely formidable and difficult to play against.
Mullen helped set the template for skilled, smallish forwards in the NHL (and with the Flames).