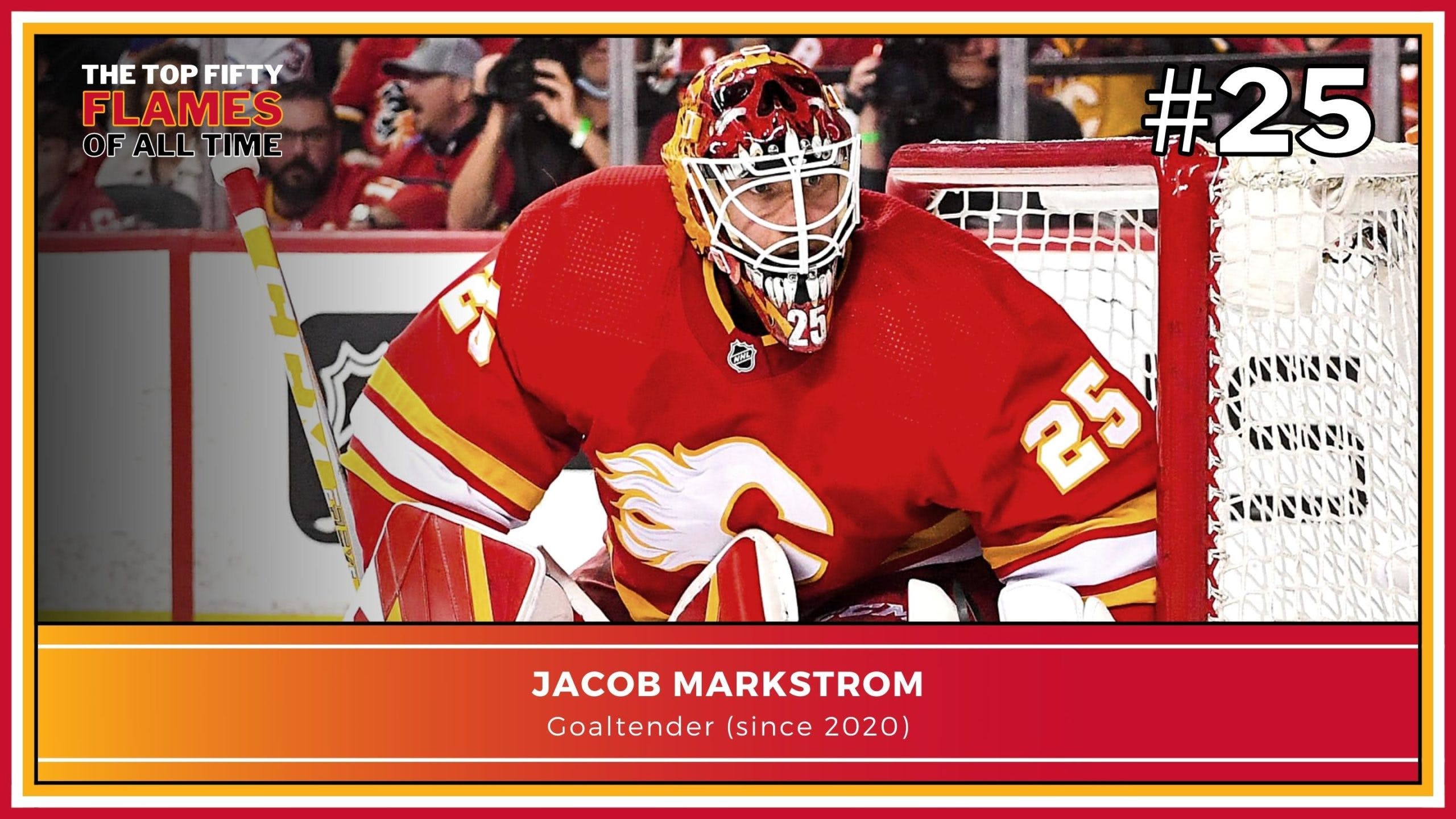 By Ryan Pike
4 months ago
Can one great season catapult a player to spot among the greatest to pull on a Flames jersey? In the case of a goaltender that back-stopped the Flames to a division title, the answer is unabashedly “yes.”
Let’s look at Jacob Markström, who lands at #25 on our list on the back of one really good season of hockey.
Player, 2020-present
A product of Gälve, Sweden, Markström came up through the Brynas system and made his pro debut in 2007-08. His strong performance in the Klavserien playoffs gained him a lot of scout attention, and he was selected in the second round of the 2008 NHL Draft by the Florida Panthers.
Markström spent two more seasons in Sweden before heading to North America after signing with the Panthers in 2010. He spent the better part of four seasons with the Panthers organization, bouncing between the NHL and the AHL and not quite getting a foothold with the big club. He was traded to Vancouver in 2013-14 and finally established himself as a full-time NHL goalie in 2015-16 with the Canucks.
Markström established himself as a workhorse goalie for the Canucks – he played 60 games on two occasions – and put together some really good regular seasons, but he failed to have much playoff success until the Canucks went on a bit of a run in the Bubble Playoffs in 2020. But by that point, there was an expansion draft looming and the club had Thatcher Demko waiting int he wings, so the Canucks cut bait with their longtime goaltender. In a fun twist of fate, he landed just a little bit east with them: with the Flames, arguably their most bitter rival.
The Flames hitched their wagon to Markström with a six year deal worth $36 million total. The first season was… challenging. The Flames under Geoff Ward were really inconsistent and a bit of an adventure in their own zone. Moreover, Markström suffered a concussion from a nasty collision with Tanner Pearson midway through the season, and it took awhile after his return for him to look like his “usual” self.
Markström bounced back massively in 2021-22 in his first full season under Darryl Sutter. The Flames’ defensive systems were more coherent and Markström had to be heroic less often to win games. He faced fewer grade-A chances and got more run support. As a result, his numbers took a big jump upward and the Flames had one of their better seasons in club history.
Markström had the second-most shutouts in a single season of any Flames goalie ever – his nine goose-eggs only trailed Miikka Kiprusoff’s 10 in 2005-06. His .922 save percentage was third-best by a Flames goalie who played 20+ games in a season – the two seasons ahead of him are Kiprusoff seasons. His 2.22 goals against average was fourth-best by a Flames goaltender in a single season. As a result of all this excellence, he finished second in Vezina Trophy voting, and he back-stopped the Flames to a division title and a playoff series win over Dallas. (He was, uh, less good against Edmonton, but the whole team underwhelmed in that series.)
A single amazing season gets Markström firmly in the middle of this countdown. With four seasons left on his current deal, he may rise higher before his time with the Flames concludes.