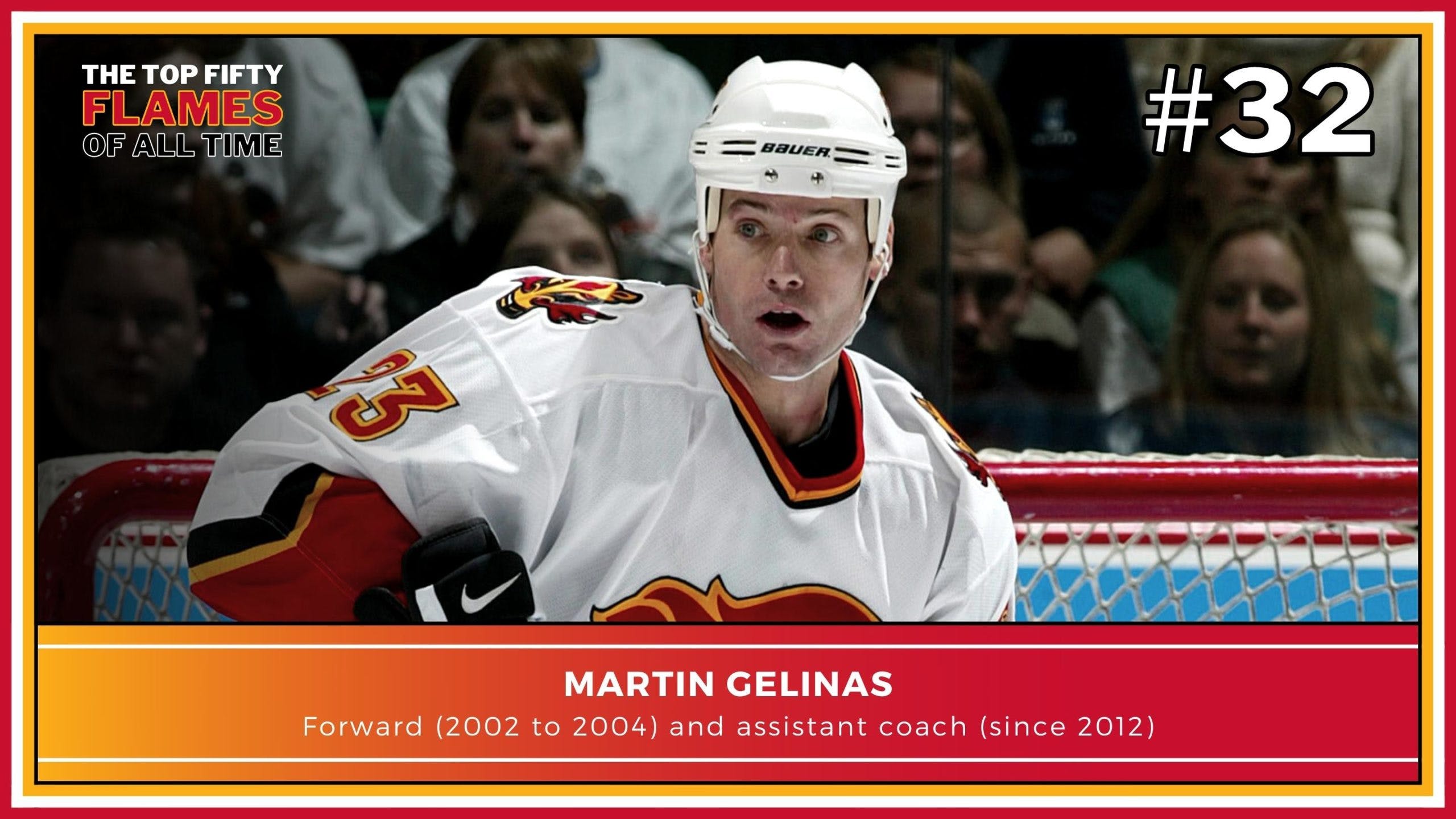 By Ryan Pike
4 months ago
Sometimes a player makes an indelible impression on a franchise in a very short time. There’s one person on our Top 50 list that was only a Flames player for two seasons, but he was incredibly clutch during those two seasons.
Friends, let’s talk about #32 on our list: Martin Gelinas, otherwise known as “The Eliminator.”
Player, 2002-04; Assistant Coach, 2012-21; Development Coach, 2021-present
A Quebec product, Gelinas played his junior hockey with the Hull Olympiques and was drafted by Los Angeles in the 1988 NHL Draft. He was traded to Edmonton in the Wayne Gretzky trade and subsequently spent time with Quebec, Vancouver and Carolina.
Gelinas landed with the Flames in 2002, signing as an unrestricted free agent. He was rock-solid in 2002-03, finishing with 21 goals and 52 points, and finding chemistry with Jarome Iginla and Craig Conroy. That chemistry went into overdrive in 2003-04; his regular season production dropped to 17 goals and 35 points, but he had five goals and 10 points in the playoffs.
Three of those five goals were game-winning goals in series-deciding games. His overtime goal in Game 7 of the Vancouver series won the Flames a series for the first time since the 1989 Stanley Cup Final. His overtime goal in Game 6 of the Detroit series sent the Flames to the conference final for the third time in franchise history. His non-overtime goal in Game 6 of the San Jose series sent the Flames to the Stanley Cup Final for the third time in franchise history.
Also, he was responsible for this gem.
Following the lockout season, Gelinas left the Flames as a free agent. After stops in Florida, Nashville and Switzerland, Gelinas retired from hockey.
Post-retirement, Gelinas returned to the Flames: he served as assistant coach from 2012 to 2021 – working under head coaches Bob Hartley, Glen Gulutzan, Bill Peters and Geoff Ward, serving both as power play and forwards coach, and the “eye in the sky” at times. He’s since moved into a player development role, similar to a gig he had with Nashville following his retirement.
Gelinas was not a Flames player for a long time. He doesn’t rank highly on the franchise leaderboards in any important statistical category. However, few players have scored more crucial goals at crucial times than Gelinas has. When you have fully earned a cool nickname like “The Eliminator,” you better believe you’ll feature prominently on a list like this.